The Wolf of Badenoch

by SUNS OF ARQA 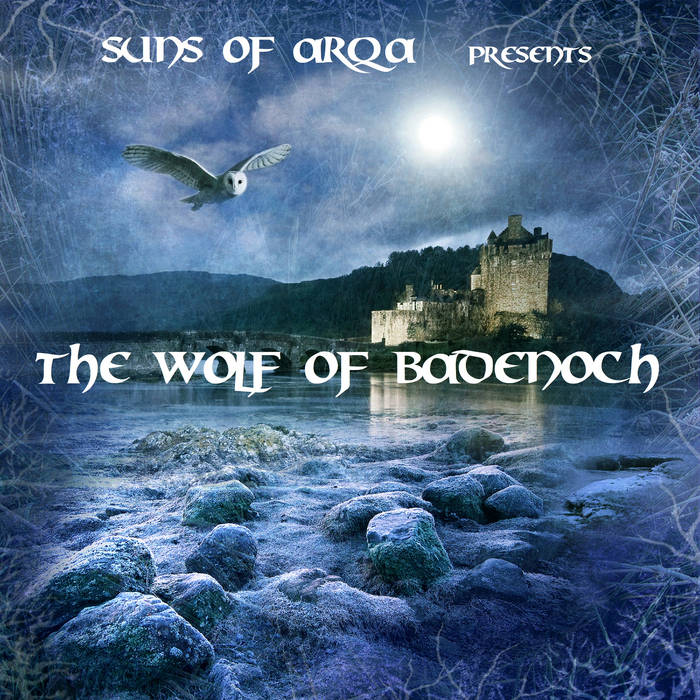 'The Wolf of Badenoch' (1343-1405) is based on the life of Alexander Stewart, Earl of Buchan (Alasdair Mór mac an Rígh), the third surviving son of King Robert II of Scotland, making him the great-grandson of Robert the Bruce.

The Wolf fights a long and raging battle with the power and corruption of the Church, especially Bishop Bur. In 1390 The Wolf burned Elgin Cathedral to the ground and destroyed much of the royal burgh of Elgin. On his deathbed, a mystic from the east prays for the release of his soul.

The Wolf passed away peacefully in 1405 and was buried at Dunkeld Cathedral where his casket can be seen behind the altar. This album is an epic journey through the life of one of Scotland's most notorious historical figures.

Behind every album is a story and this one began with a lone piper, the late great John Snelson, playing his deeply haunting bagpipe tunes, not beside some misty loch in the Highlands of Scotland but in a rundown shopping precinct in Salford, it seems great music often comes from hardship.

John, was a self-taught musician and street busker from Eccles, and in time became a regular player with SUNS OF ARQA, since the early 90’s after Wadada hired him to play the pipes at his mother’s funeral and instantly heard the power of the Pibroch aligned with his very own global world dub movement.

Sadly, John Snelson met an untimely death while still only in his 40’s, it was a terrible loss but being a great collector and composer of tunes, he had recorded a live street session on cassette tape which Wadada found by accident one day while sorting through his archives.

By some strange twist of fate, and possibly a longing to escape to the Highlands, more than twenty years later, Wadada and I were living on the banks of the River Spey, making music, looking at the stars, and mostly escaping from life on the road.

Now as most of you will know, the Highlands of Scotland are filled with many myths and ancient castles. And, on one fine day, while wandering through it’s local hills and valleys Wadada accidently discovered the Wolf’s lair.

Coincidently, it seems we were The Wolf of Badenoch’s neighbours, separated by time, by more than six hundred years. So began a quest of research and discovery... while immersing ourselves in history, visiting the atmospheric and beautiful Lochindorb, it appeared the Wolf had many castles having once owned much of the land.

Yet, it seemed whenever the Wolf of Badenoch’s name was mentioned the Highland folk's faces would become serious and shadowed, this was not a popular man. His reputation followed the rhetoric of a brutal dark force for ill, of which the church at the time promoted.

The fight between the Church and the Monarchy would be an ongoing battle, while each sought power and dominion over all. Undoubtedly the story of The Wolf of Badenoch is an extravagantly theatrical and histrionic tale. It was through working with gifted Irish musician and composer Brian Hyphen who took the tunes then arranged and mixed the music, that the album began to unfold.

While each artist on the album is an essential and significant part of the emerging soundscape, it is exceptional Scottish poet Alan McLeod whose lyrics explore the love story and songs of the Wolf; Classical Indian vocalist Sanyogita Kumari who adds depth and mysticism, Ronan Browne who adds the magic of the Uilleann Pipes, and finally you, the listener, who by your very act of listening and absorbing the music allow the story to be told...

To all of you we say thank you for your love and support.
Enjoy the music
Angel Eye x

Produced by Michael Wadada
Mixed and arranged by Brian Hyphen

SUNS OF ARQA are one of the greatest behind-the-scenes pioneers of World Beat, Downtempo, Ambient and Electro-Dub. Sonic genius Michael Wadada created SUNS OF ARQA in 1979. Finding inspiration around the globe, they set out to interpret indigenous, tribal and classical folk traditions. The result is a deeply spiritual vibration that merges cultures, faiths and musical genres. ... more

Bandcamp Daily  your guide to the world of Bandcamp

Benji B talks about his new compilation ‘Deviation Classics’